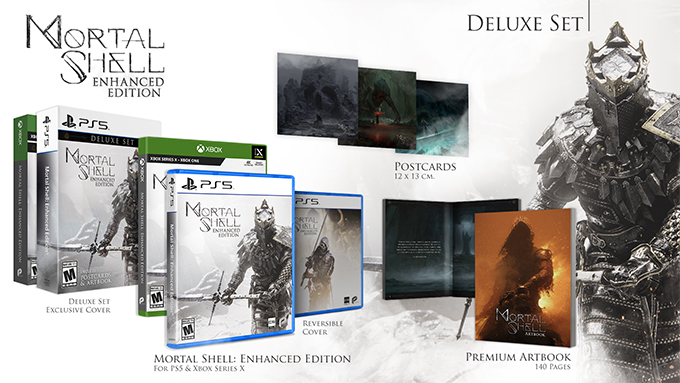 Thursday, March 4, 2020: The award-winning action RPG Mortal Shell has now sold more than 500,000 units worldwide, its publisher Playstack has revealed. The announcement arrives alongside the release of Mortal Shell: Enhanced Edition, a fully remastered version available digitally today on Playstation 5 and Xbox Series X|S.
“Mortal Shell continues to blaze a trail for Playstack,” said the publisher’s chief executive Harvey Elliott. “Reaching 500,000 sales is a wonderful and deserving achievement for the supremely talented developers at Cold Symmetry. It gives us plenty of optimism for a busy year ahead for the game, which kicks off today with the release of Mortal Shell: Enhanced Edition. Our fans have been incredible and we can’t wait to show them what’s next.”
Mortal Shell: Enhanced Edition provides a superior spectacle of the game’s haunting beauty with its rich, meticulous, razor-sharp details never seen before on console. Along with upgraded textures, 4K resolution, faster loading times and DualSense support, this remastered version delivers uncompromised 60 frames-per-second gameplay on PS5 and Xbox Series X.

Playstack also today has announced further details on Mortal Shell: Enhanced Edition - Deluxe Set, a very special limited edition that will ship across Europe and North America in April. Filled with extras, this packaged version comes with a 140-page artbook, showcasing never-before-seen concept art and illustrations created during the game’s development, as well as an exclusive Reversible Cover and Art Postcards. With an MSRP of $39.99 (€39.99 / £34.99), the Deluxe Set will be available in limited supply at the following major retail partners: GameStop (US), GAME (UK), GAME (Spain), Amazon (Spain), GameStop (Italy), Flashpoint (Germany), Media Markt (Germany).

** Please note that players who have the PS4 version of Mortal Shell will not be able to carry their progress over when they upgrade to the PS5 edition and will need to start the campaign again.

*** A standard physical Edition of Mortal Shell Enhanced Edition will also be released in April.