Posted February 19, 2021
Guardian Tales' new roadmap showcases plans from now up until later this year, with tons of feedback being implemented, along with new modes like co-op, World Adventure Mode, and Top Arena. Read on for the extensive breakdown and images shared earlier this week by Kong Studios. 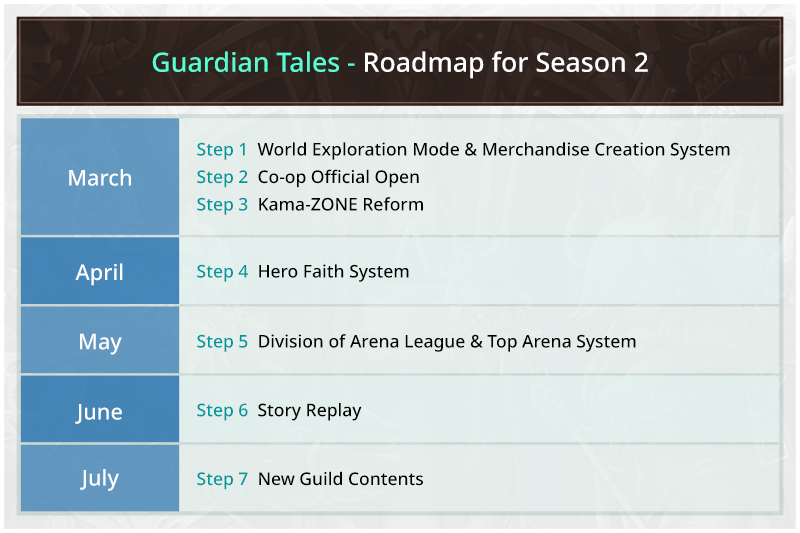 3D printing will also be added to Guardian Tales as a part of this update. This addition can be found in the blacksmith workroom.
After bug fixes and quality improvements from beta test feedback, co-op will now be an official addition to Guardian Tales! Co-op will be a rotating weekly event in the Arena, with constant updates and improvement plans expected, based on further feedback from the community. The co-op map will change each season with plans for a Speedrun mode to be added during Season 2.
Changes to Co-op Rewards
Kama-ZONE is getting some changes for Season 2 and will no longer be restricted by tickets. Players can enjoy this mode at any time with the endless floor format being changed to a finite one.
Each hero can be faithful to a total of 5 gods in step 4 of Guardian Tales Season 2. With an increasing faith level for each god, the hero will be granted holy power to match that.
Arena League Division
Top Arena System
Many Guardians have requested a Replay Mode for Guardian Tales’ Story Mode. We are designing the replays so that they will not only let players relive each stage, but also experience a perfect reimagination to regrant most of the rewards that were given previously. However, artifacts in-game and quests intertwined in many worlds made it hard to create the Main Story Replay. This development roadmap will start with Side Story reversion, then Side Story Replay, and lastly the Main Story replay.
New guild content is also planned by Kong Studios during Season 2 of Guardian Tales. The development team is coming up with numerous ideas while creating and testing prototypes.
The above roadmap reflects where Guardian Tales is set to go from now until Summer 2021. The Kong Studios’ team is excited to share more, including info on the first world of Season 2 in mid-April.