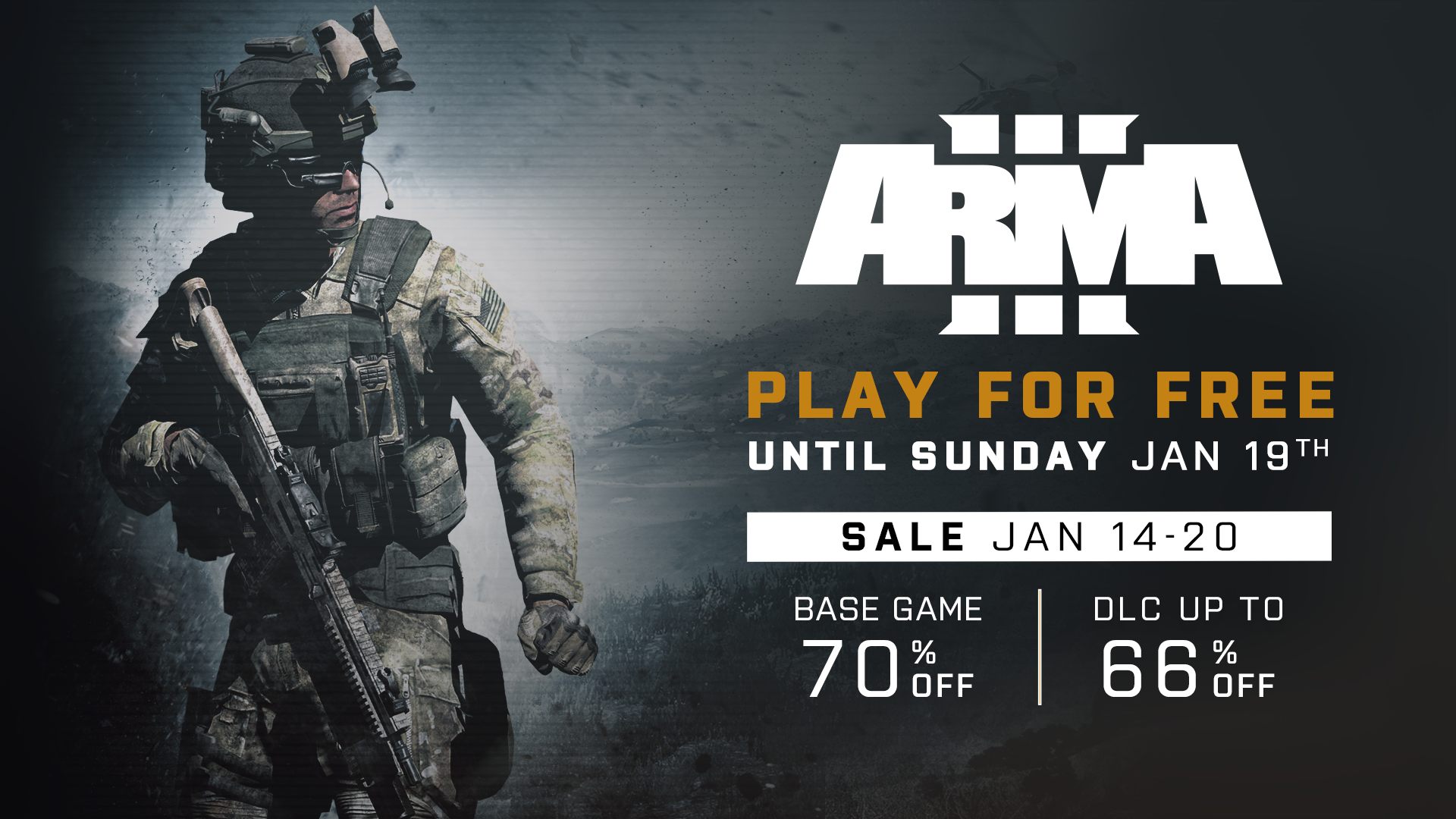 PRAGUE, Czech Republic – January 14, 2020 — Bohemia Interactive is excited to announce a Free Week for Arma 3 on Steam, starting today January 14th (10 AM PST), and ending on Sunday, January 19th (10 AM PST). To play Arma 3 for free, people simply visit the Arma 3 store page on Steam and click on the green "Install" button.

To continue playing Arma 3 after the free week ends, gamers can take advantage of a massive 70% discount on the Arma 3 base game, and/or save up to 66% on Arma 3 DLC packs and expansions until January 20th. Those wanting to secure the complete Arma 3 collection can buy Arma 3 Ultimate Edition, including Apex and Contact, with an additional 15% bundle discount on top of the price cuts that are live during the free week.

Apex introduces new weapons, vehicles, gear, and operations alongside a brand new warzone, the South Pacific archipelago of Tanoa. Contact adds new weapons of war as well but also blends the incredibly immersive Arma 3 military sim experience with a sci-fi single-player campaign where a military training operation unravels into an encounter with extraterrestrial intelligence, all set across new terrain and with fresh gameplay experiences.

During the Free Week, all Steam users will have free access to the Arma 3 base game plus the Arma 3 Apex expansion. This also includes Arma 3's full "The East Wind" single-player campaign and the "Apex Protocol" co-op campaign. New players might also familiarize themselves with the game's controls via the "Prologue" tutorial campaign.

Arma 3 was first released in 2013 and has sold more than 5 million games to date. Over the past years, it has been reinforced by 80 platform updates, as well as 10 DLC packs, and 2 expansions. Meanwhile, Bohemia's content creation community has shared more than 70.000 items to the Arma 3 Steam Workshop. Arma 3 continues to be one of the most popular games played on PC, with a 90% approval rating based on 100.000+ Steam user reviews, and an average playtime per user of 150 hours.